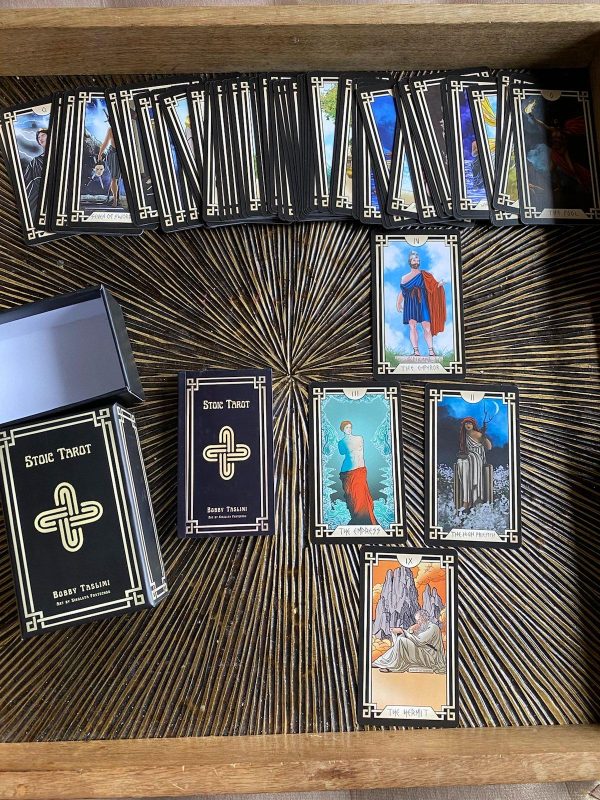 Another successful brand launch! After a year of hard work, the Stoic Tarot Deck is now available worldwide. The Stoic Tarot is a bootstrapped brand, which became available in pre-launch phase early 2021. The product is produced in Italy using 100% eco-friendly papers & inks and the topnotch printing is powered by solar energy. Customers have been continuously praising the deck since receiving it.

About the Stoic Tarot:

In creation of the Stoic Tarot, the ancient wisdom of the great stoics was reinvented in cathartic and captivating artwork.

During one’s journey to fulfillment and happiness, stoicism can immediately resonate. The world we live in can be intimidating, dark and a scary place. Especially when you are faced with failure in a society where failure is seen as a weakness. Stoicism is a philosophy for leadership. It teaches us that, before we try to control events, we have to control ourselves first. Our attempts to exert influence on the world are subject to chance, disappointment, and failure–but control of the self is the only kind that can succeed 100% of the time.

Created by Bobby Taslimi and designed by Nikoleta Pantechou, Stoic Tarot is a deck built around Greco-Roman philosophy and art. The deck is also very inclusive. Whenever you feel the need to explore your inner thoughts and feelings, and have those explained by philosophy, this is the right tarot deck for you. The key characters used in this deck are famous personalities from the dark and middle eras, and the personifications carry a lot of meaning leaving room for interpretation.

With a bit of research on ancient mythology, the great stoics & by using Stoic Tarot’s guidebook, the Stoic Tarot deck can help explain thoughts and situations, and guide you to solve them to feel content, gratified and ultimately wiser with the knowledge of the stoics.